It’s a Story of a CyberHeist

It’s a Story of a CyberHeist

What if you started your morning like many others, thinking you were on top of your game — only to find out the floor fell beneath your feet?

That is becoming a serious possibility for more employees who think they are following their company’s protocol, only to find themselves looking at the wrong end of the law.

Because Blue Lance is about people first, processes second, we find ways to help you practice cyber security vigilance. One way to do that effectively is to share stories of what has or could happen inside your business.

Here is the beginning of one such story that will cause you to think in ways you might not have imagined so you can protect yourself and your company. It’s the story of an employee at the center of strong company fallout. It’s a story that could happen at your company.

It’s the story of a cyberheist.

Once you have read our first chapter (out of 8), let us know what you think. What questions arose for you while reading about William’s plight? Were you sympathetic or did you think he was probably the culprit?

Every morning, William Burrough drove his wife Melissa to work and completed his journey to the office.

Every morning, he made himself a cup of coffee, settled in to his chair and started his morning routine five minutes before the other money account managers entered the office.

And every morning, he enjoyed a solid four hours of hard work before taking a break, basking in the positive feeling his career had provided him with.
Every morning, that is, except for this one. This morning, William’s phone rang just as he sat in his chair.

“Hi William, it’s Marie. Can I see you in my office for a moment?” 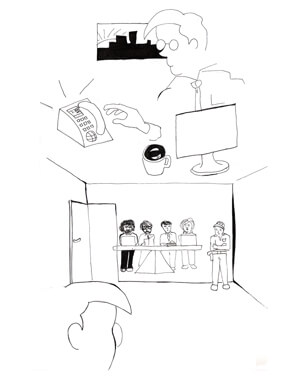 He hung up and headed down the hall. Marie didn’t usually talk to him before noon.

His manager’s office door was open when he got there. And Marie was in her office, as he expected.

But she wasn’t alone. Standing next to his boss, in order, were the CIO, HR Director and the Chief Security Officer.

“Please, have a seat,” said Marie.

“William, I know you know our HR Director Mike Lamand our CIO Veronica Smith. This is our Chief Security Officer Karun DasGupta.”

“Nice to meet you,” said William, still confused about what was going on.

Marie took a deep breath. “William, do you remember several weeks ago when you told us about the money missing from Tina Parker’s account?”

Boy, did he ever. Ms. Parker had called that morning, frantic over having lost almost a million dollars in the blink of an eye.

William nodded. “I’ve been worried sick about it. I must’ve called IT every day since it happened to resolve the issue.”

“We have reason to believe you know something about that money.”

—
Sound like a nightmare? It’s only the beginning. And it could happen at your company, too.

Next week we’ll tell you a little more about William’s fate. Or if you’re ready to see how the whole thing could have been prevented in the first place:

See the product that could have stopped it here
Or Contact Blue Lance at info@BlueLance.com to find out more
Or call us at 800-956-2583

All characters and other entities appearing in this work are fictitious.  Any resemblance to real persons, dead or alive, or other real-life entities, past or present, is purely coincidental.

About the Author: Umesh Verma